How to Use They, Them, Their
​What is Gender
Genderbread Person Illustration
​Resources

​How to Use the Pronouns ​They, Them & Their

These pronouns are commonly used by people who identify as nonbinary, or not as female or male.
​
​First person never changes and is always "you."
Pronouns are distinguished as: first, second, and third person. Here is an example of how to use the "they" pronoun:
Example: You're such a lovely person for coming to this page to learn a little about this pronoun. :)
Second person can be "she," "he," "it" or "they"
Example:  Instead of saying, "She is..." "He is...," or "It is so chill," you would say, "They are so chill."
Third person can be "his", "her(s)", "its", or "their(s)".
Example:  Instead of saying, "His curiosity..." "Her curiosity...," or "Its curiosity is super cool," you would say, "Their curiosity is super cool."

Speaking of examples, I hope you found these helpful :-).​

There used to be three pronouns in the English language. One for female individuals: "She." One for male individuals: "He." And one for objects: "It." Starting in the 1970's--at first very slowly, then more and more rapidly--it became known that there are people who don't experience themselves as female or male, who suffer emotional and often even physical pain if they try to shoehorn themselves into one of the two widely-known gender buckets of female and male.

And even biological sex is not simple. The widely known combinations are XY for female and XX for male. But there are actually six common karyotypes: X, XX, XXY, XY, XYY, and XXXY.
Genders and Sexes Are Not Tied to Each Other
In a nutshell, there are multiple genders and multiple biological sexes. And those genders and sexes are not automatically tied to each other.

​Once the constraint of two genders has been lifted and a person is free to actually get a sense of their gender, they may discover that their gender experience is highly unique.

To illustrate, here is an example from another area of life, namely spirituality. As a spiritual person, you may very much identify as Neo-Pagan, Hindi, Christian, Jewish, Muslim, Buddhist, etc. Or you may be drawing on several religions and  faith traditions. Or your faith may be completely unique and specific to you.

​Or you may identify as, say, Christian but only connect with certain things about Christianity and not with others. This is to say, that each person's beliefs are, to a larger or lesser extent, unique to them. We would not expect them to fit too neatly into a box that has been very narrowly defined (that would be fundamentalism). The same is true for gender and probably for many of other things.
Unique as a Fingerprint
Considering that each of us has a unique fingerprint, voice, eyes, etc. (even the shape of a heart is a little different from person to person), it makes sense that our genders, beliefs, perceptions, and so on, also are unique to each of us.

​That's a wondrous thing because it's an example of how each thing that exists is a unique and sacred expression of the divine and sacred in this uniqueness. Likely, the variations are as endless as the divine themself.

This infographic is a popular way to illustrate some of the answers around gender, biological sex, and attraction 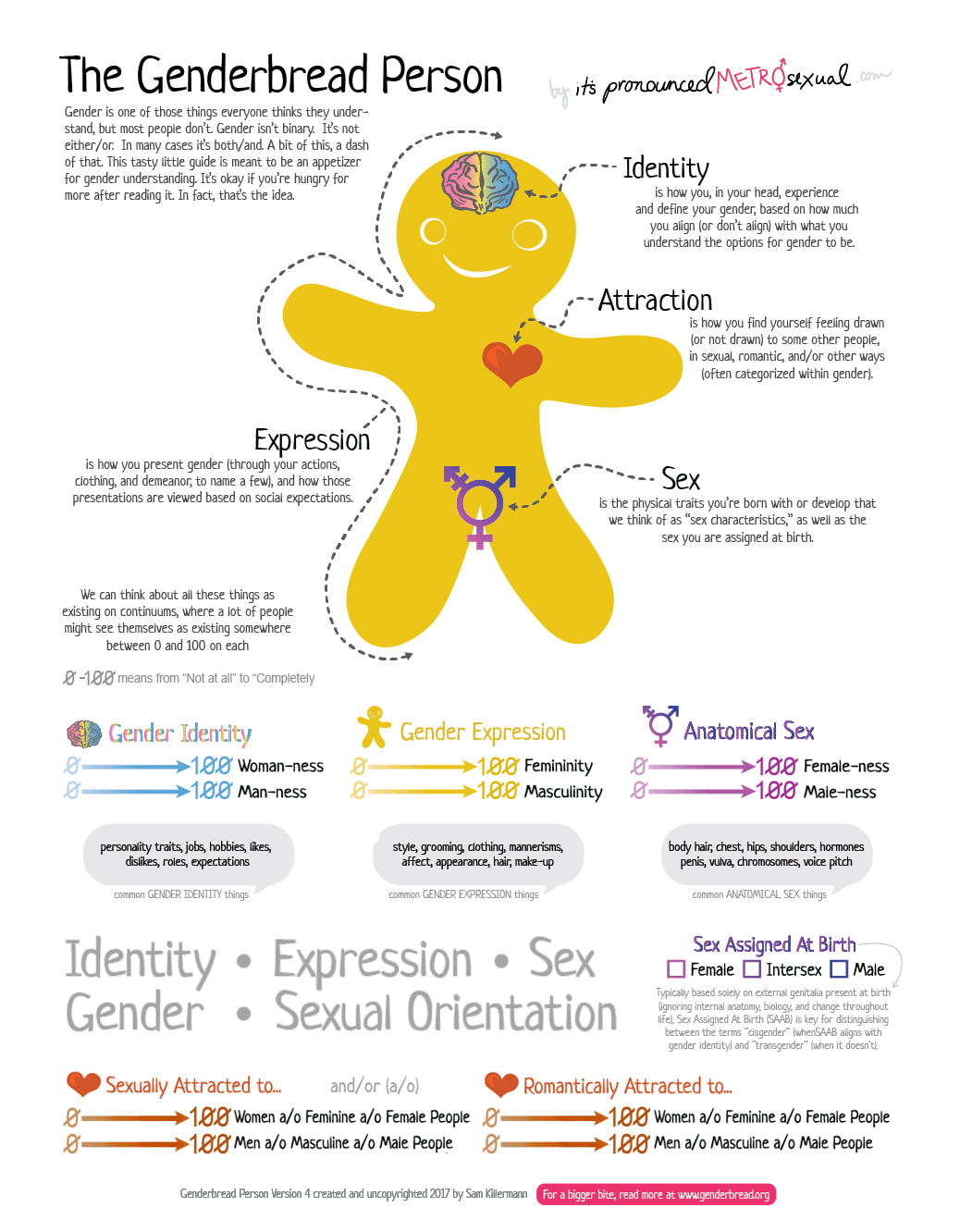 ​If this primer brought up more questions, here is a link to an excellent site: